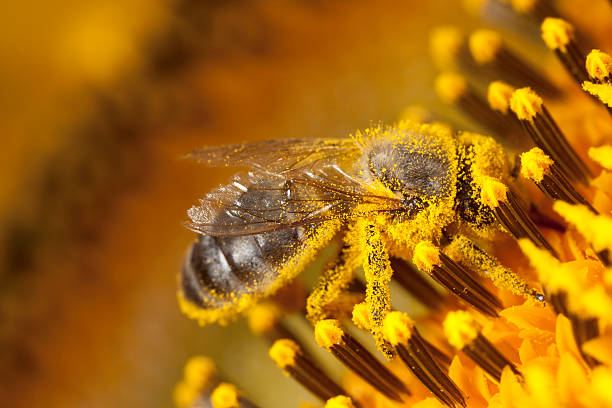 The Importance of Insects for Pollination

Pollination is part of the reproduction of flowering plants to begin seed production. About 80% of all pollination is by animals. Therefore, plant species has evolved different and unique ways to attract animals for their pollen to be transferred from the anther of its flower to the stigma of another flower. For example: 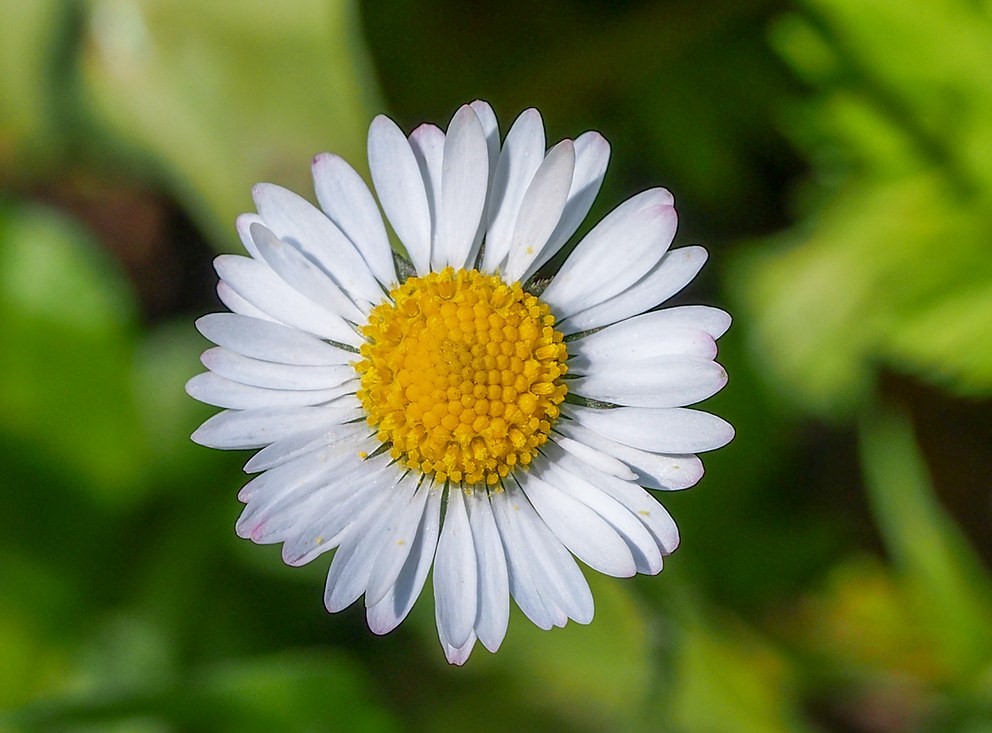 Many plants rely on warm temperatures because otherwise pollinating insects are not active. The daisy has evolved a technique to give insects every opportunity to warm up.

Throughout the night, daisies close up to protect themselves against the elements. But once they feel the warmth and light of the sun, they not only open their flowers, but the flowers turn to maintain facing the sun and so absorbing as much heat as they can.

This attracts insects so they too can warm up and in turn means they can collect more nectar from more flowers and pollinating the daisies as they go. 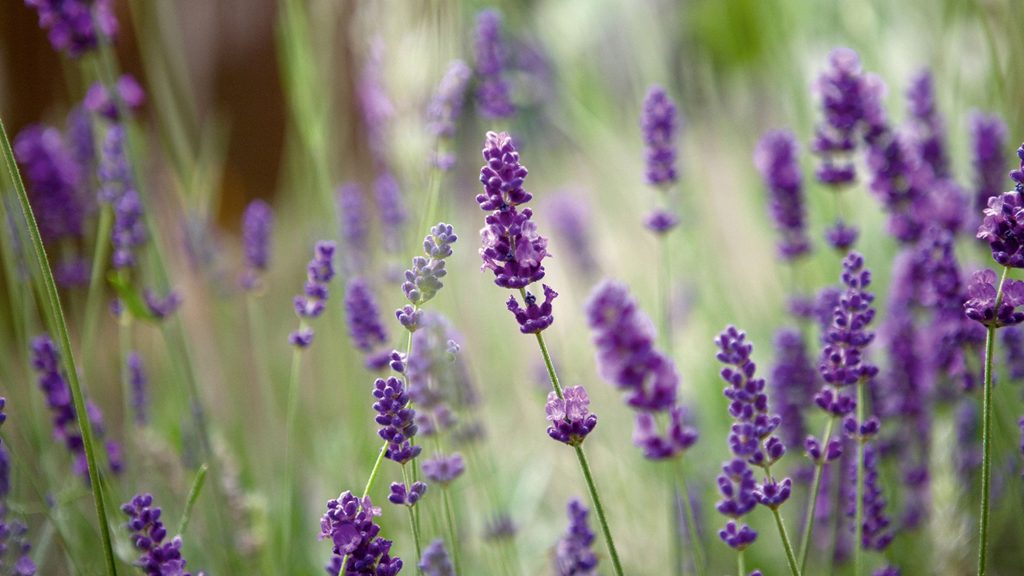 Lavender tempts pollinators to their flowers by enticing them with a strong fragrance. This fragrance is caused by oil glands imbedded in plant hairs that cover the stems, leaves, and flowers!

The pollen and nectar produced is a particular favourite food to some pollinators, especially bumblebees, which in turn pollinate the lavender.

Not all scent attracting flowers have aromatic smells to draw in pollinators. Some flowers, such as the Rafflesia, attract flies with a smell of rotting meat! 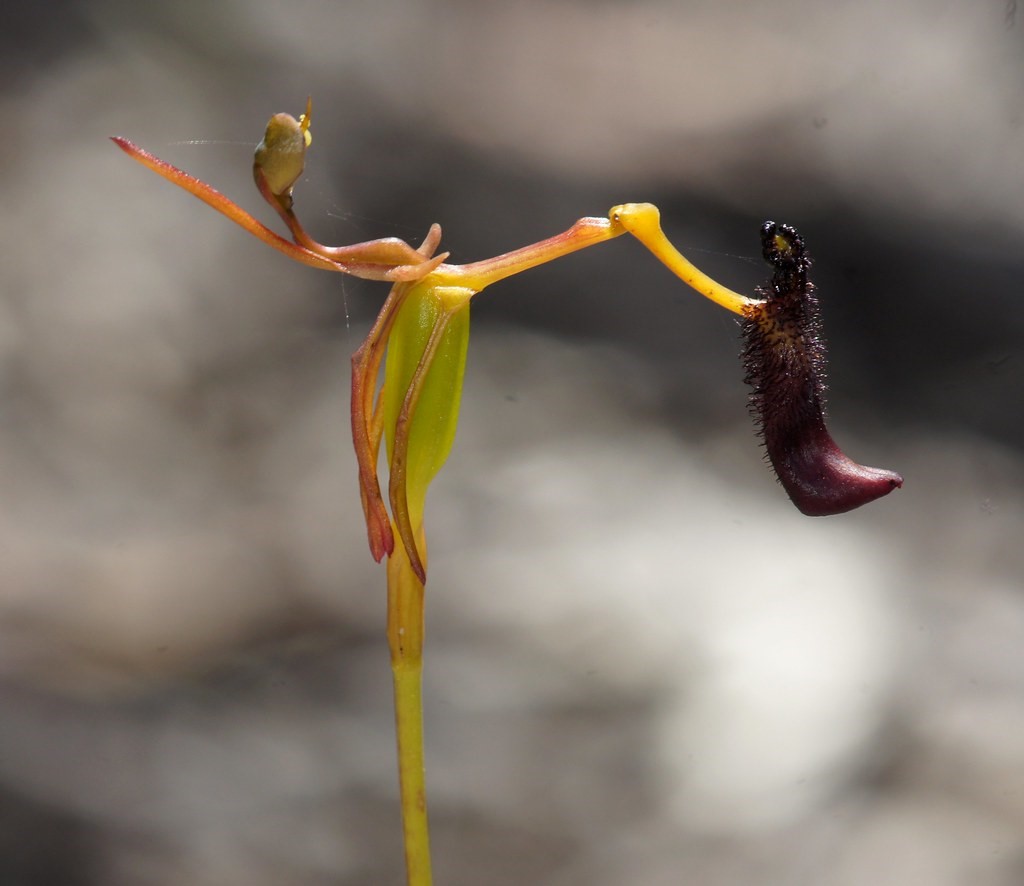 During the mating season of the thynnid wasp, females produce pheromones to attract males. A hammer orchid synchronises its emergence with this period, mimicking the chemical scent with a more intoxicating smell.

The orchid’s flower also mimics the shape and colour as female wasps, and even sits at the same height as neighbouring females!

Many insects, birds, and mammals pollinate plants as they forage on the nectar and pollen. Bees are recognised as the most efficient pollinators, this is mainly because: 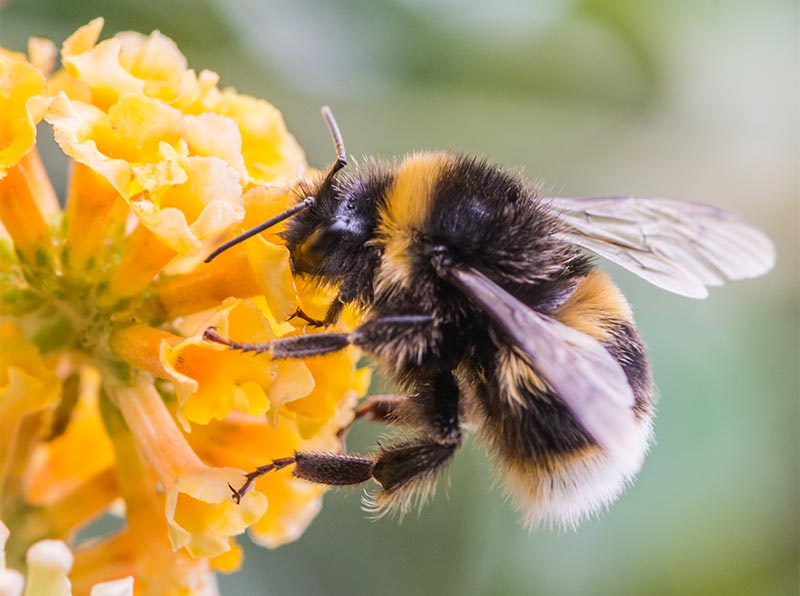 However, important insect and bee species are declining due to: 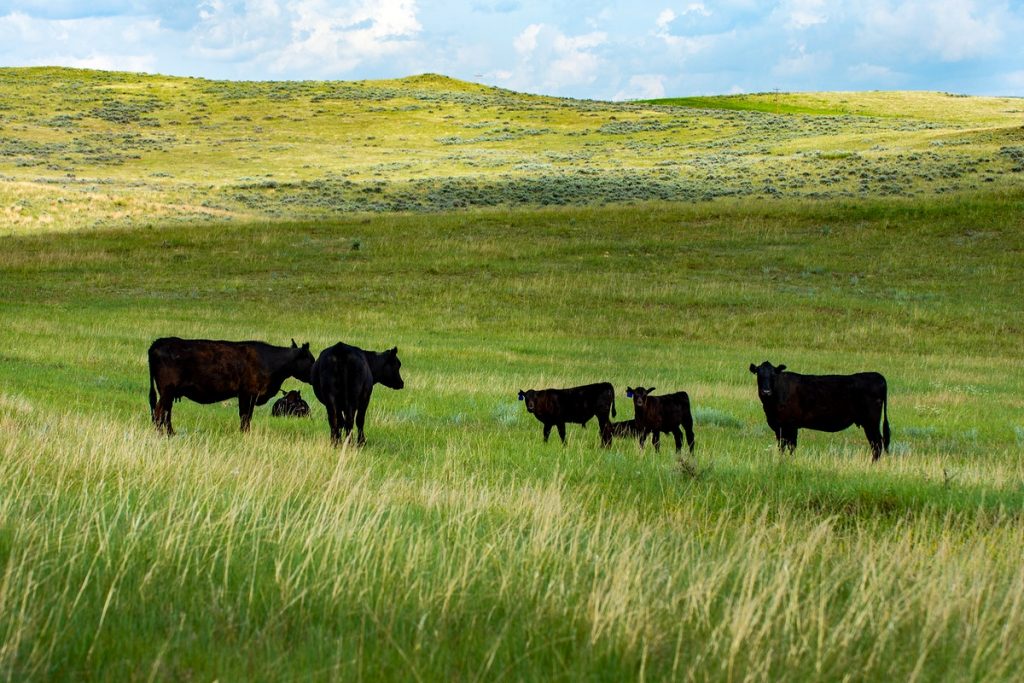 For example, an astonishing and shocking 97% of unimproved, wildflower meadows in the UK have been lost since the Second World War, leaving insects with less vital foraging grounds. Furthermore, we continue to disrupt and destroy certain vegetation, trees and hedges, which are usual safe and dependent nesting resources.

Destruction of such habitats can still leave some remains of species-rich grasslands. However, these habitats are often small and fragmented from one another. Some insects, especially bumblebees, have large foraging ranges and require large areas to gather pollen to support their colony. Fragmentation and disconnection of these habitats can lead to species becoming isolated within an area. Even if there is enough food to support them, this still can reduce the genetic diversity within insect colonies due to a decreased gene flow from reduced migration of insects into new populations. Ultimately, this increases vulnerability of bottlenecked species to natural stressors, such as disease and other adverse events.

Though pollinating habitats still remain, they are often degraded or ‘lower in quality’ because of a loss of certain important plants and plant diversity. This can attributed to many factors, including but not limited to agricultural grassland improvement and lawn maintenance, introductions of invasive, non-native plants which are less suitable for foraging and pollination, and soil compaction from increased foot and vehicle traffic reducing the loose and friable soil necessary for some ground-nesting insects and bees.

Climate change is having global impacts on the intricate wildlife and plant interactions which are vital in maintaining, supporting, and balancing ecosystems. In the UK, warming winters can influence some insects – who rely on temperature as an indicator of spring – to emerge from hibernation earlier. If this is not in synchrony with forage plants emerging, then there can be insufficient floral resources. This is especially threatening for species with a narrow dietary preference and for some emerging queen bees, who not only rely on early forage but must find suitable nest site, which is more limited in winter. This also makes early emerging insects vulnerable if a warm spell is followed by a return to normal, colder conditions of winter, which they would usually be sheltered from but will instead have to use up valuable reserves to survive.

Some important pollinators, such as bumblebees, hoverfly larvae, and some beetles, hibernate underground where they are protected from predators, disease, and the weather. A predicted increasingly wetter winter in the UK will also be problematic and potentially detrimental to these species. Flooding increases mortality in ground-hibernating species, and although insect populations can often come back from this, if this becomes more frequent then there may not be enough time to recover between flooding events. This is particularly worrying for more threatened species, such as the Bilberry bumblebee.

The effect of a changing climate is not just limiting its effects to insects during winter. A predicted increase in extreme and episodic events during the summer, such as droughts, could also directly impact pollinators. With such a lack of rainfall, many plants become stressed with nectar sources drying up and thus floral rewards for visiting insects diminishing. This can be particularly damaging in the summer, as this is a critical period for reproduction, establishing new colonies, and enlarging overwintering fat reserves for many species. 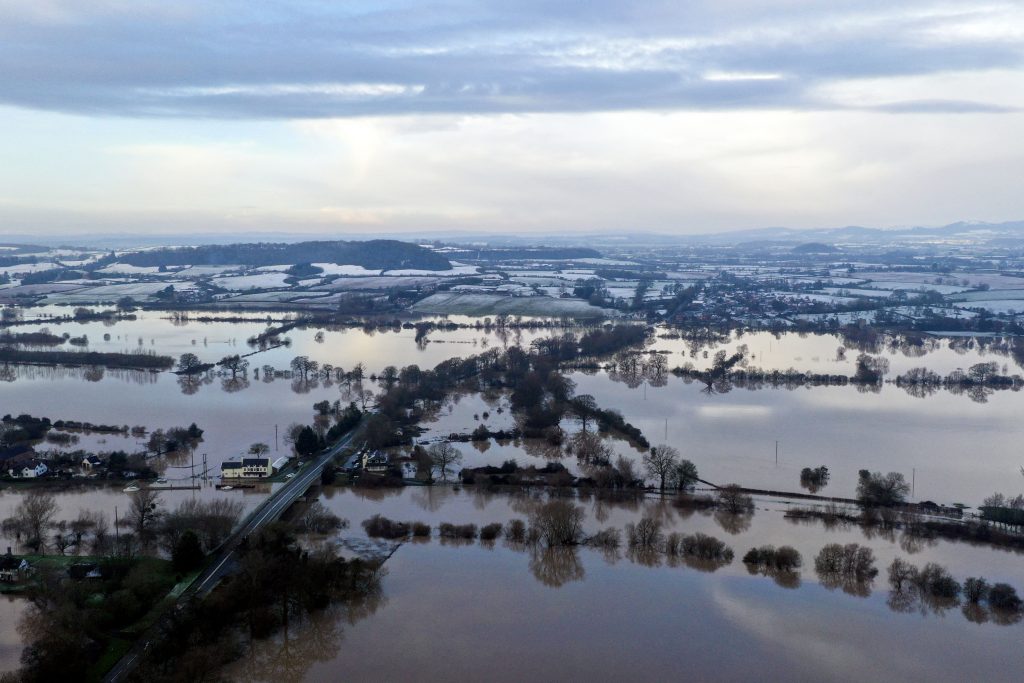 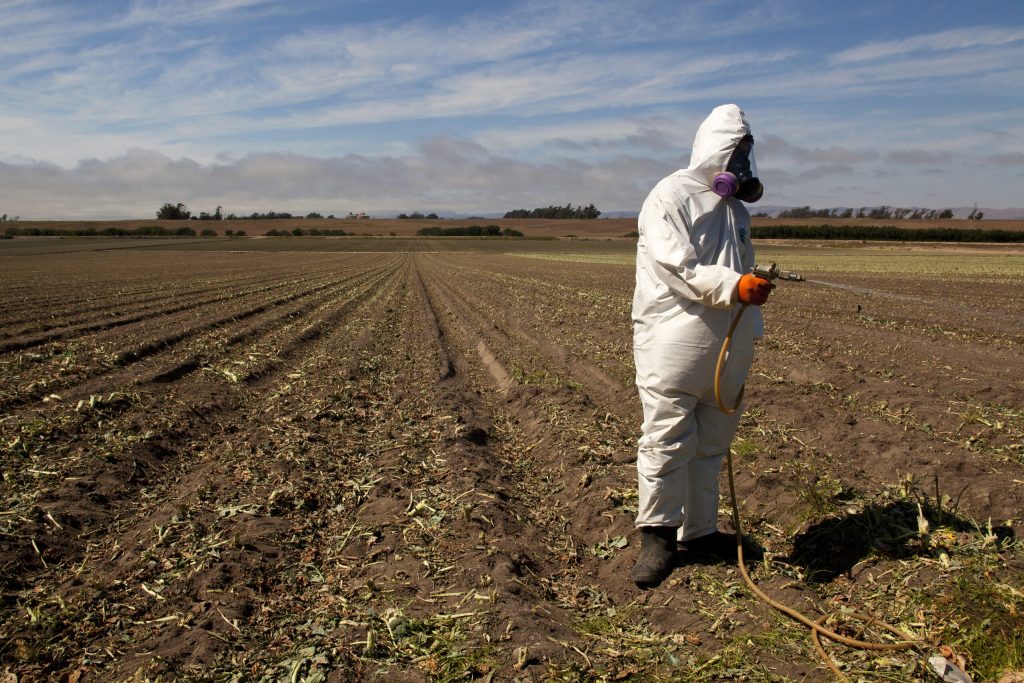 A loss of floristic diversity can often be attributed to a polluting factor. For example, nitrogen deposition (primarily from industrial and agricultural facilities) can increase nutrients within soils leading to a shift abiotic composition which in turn influences the growth of plants. This has shown in impact many pollinating insects, including butterflies. Additionally, fertilisers may be enhancing the growth of some crops, but can alter soil quality and consequently the amino-acid makeup of a plants nectar. This change and reduction of essential amino acids has been demonstrated to affect bees’ and all arthropods’ digestion of protein, and affects their development and reproduction.

However, air pollution is also more directly impacting pollinators, by ‘confusing’ insects who cannot seek out plants. This can reduce flower visits by up to 90% and pollination rates by over 30%!

Widely used systemic pesticides, such as neonicotinoids, spread throughout plants and can be found in plant pollen and nectar. Such pesticides not only reduce food availability for pollinating insects, but have been shown to have lethal effects on honeybees and reduce the reproductive success of solitary bees and bumblebees.

Bees and other pollinating insects are keystone species in many ecosystems. If these threats continue, many vital pollinating will continue to decline. This could have detrimental ecological and economical effects. For example:

All plants depending on bees and certain insects to pollinate them may struggle to reproduce and die off, altering habitat composition and the richness and diversity of certain ecosystems. This could have rippling effects up the food chain, triggering further declines on other species relying on these plants.

Insectivorous animals could directly be impacted, by losing a vital and primary food source.

Just without honey bees, there would be a much lower crop yield which would not be able to sustain the worlds population. In fact, there could be a $30 billion loss just in crop production!

What We Do and How You Can Help...

Limit Use of Pesticides

If you can, avoid using pest- and insecticides all together! You can attract natural pest predators by:

If you do use these, then use pesticides which do not contain toxic neonicotinoids! Organic and natural pesticides deter pests using more environmentally friendly plant extracts and minerals.

How You Can Help

For more information and to find out how you can help, ask a keeper during your visit and/or see