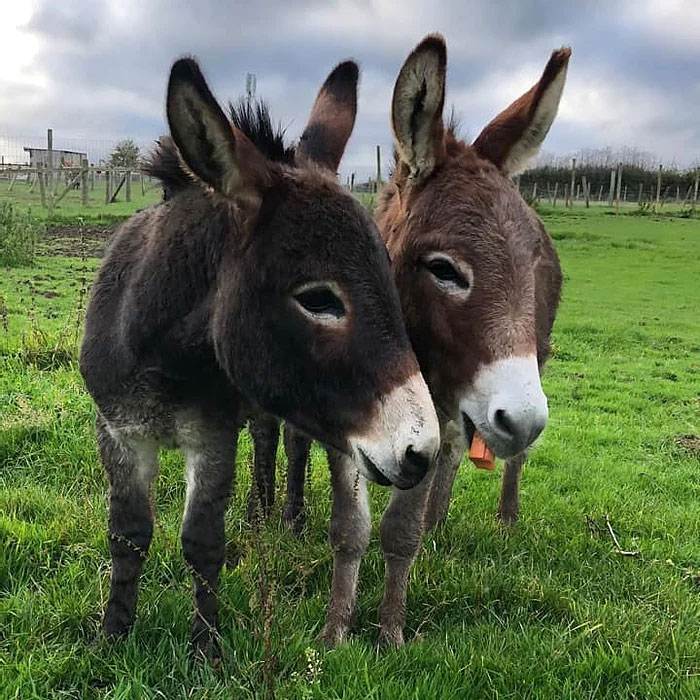 Ghost, Jane, Floss and their foals are always happy to see visitors, especially if you treat them with a carrot! These girls love to roll around in the dust and play in the fields.

Although donkeys originate from Africa, this breed emerged from the Italian islands Sardinia and Sicily. When in Africa, they would be found in arid habitats, whereas now they are more commonly found in grasslands.

As their name suggests, they are a miniature breed of donkey. To be classed as miniature, they grow no taller than 91cm compared to an ordinary donkey’s height of up to 160cm. Other than that, they are no different to a standard donkey. This smaller breed originated because a shorter strain of donkeys was introduced to these islands (Sardinia first) and as the islands are remote, the size of the donkeys remained miniature as there were no other donkey subspecies to mix with and the gene pool was less diverse.

Typically eat grass but will also eat some plants.

These ‘dwarf donkey’s use their ears to communicate. For example, if the ears are pointing forward then they are attending to something in that direction, whereas if one ear is forward and the other one is facing backwards then this signals that the donkey is curious and so is checking surrounding sounds. If both ears are facing backwards and up then the donkey is expressing anger. They are social animals, living in herds consisting of one boy (a jack) and several females (jennies). Although, more than one jack can live within a herd if they are submissive to the dominant male. They are known for their stubbornness, for example, when confronted with a danger such as a predator, they will stand still, refuse to move, and bray loudly.

A jack will fight off other male donkeys so he can then mate with all the jennies in his herd. There is then a gestation period of 10.5 and 14 months.

Although nearly extinct in their native islands, they are classed as ‘Least Concern’ because they are so widespread and numerous across the world.

Christianity claims that the cross on a donkey’s back is there because Jesus led his followers into Jerusalem on Palm Sunday riding on the back of a small donkey, and then on the day of crucifixion, the shadow of the cross fell upon the back and shoulders of that donkey and stayed. However, science claims that this cross acts as camouflage, the same way stripes act as camouflage on a zebra!