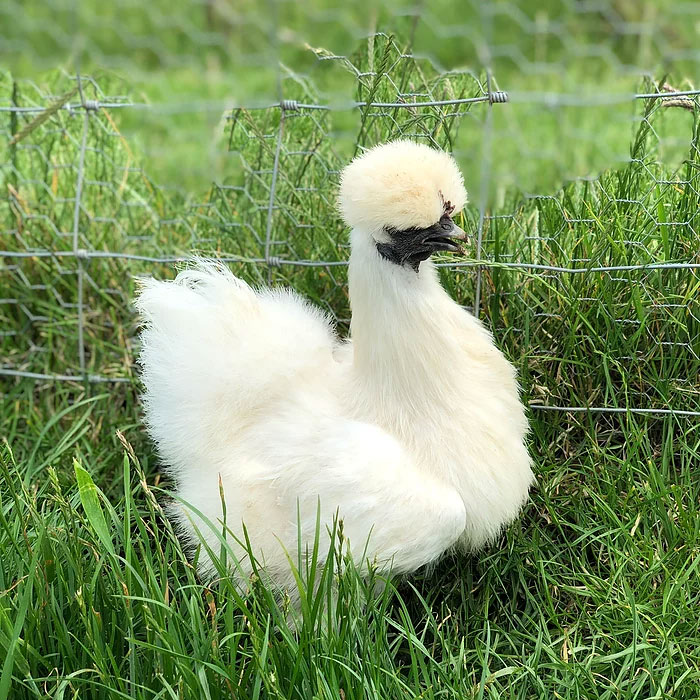 These afro-rocking chickens are some of the most docile and friendly chickens you’ll ever meet!

Silkie chickens originate from Asia, and although there is some uncertainty over its country of origin, it is believed to be China. Their feathers are not waterproof, so they prefer to inhabit warmer, drier areas.

The Chinese name for silkie means ‘black-boned’ which explains the black bones and skin they have. This is because of a rare condition called fibromelanosis which is the opposite of albinoism and causes an abnormal, hyper accumulation of dark pigments. They also have a fluffy plumage which feels like silk, hence the name the ‘silkie’ chicken. Their fluffy appearance is due to the inability for their feather barbicels to lock and hold the feathers together. Thus, they also cannot fly and have less protection from rain and cold. Their appearance is also unusual in that they have 5 toes instead of the normal 4 toes that most chickens have.

They will eat grains, corn, fruit and veg, seeds and the occasional insect and worm.

They have a great mothering instinct, going broody often and will even incubate the eggs of other chickens.

Although they are broody often, they only lay up to 3 eggs a week. They are exceptional mothers though and will incubate the small eggs for 21 days before they hatch.

A silkie chicken’s plumage, with their lack of feather barbs and inability to fly, resembles that of a dinosaur fossil from 165 million years ago. In a follow up study, scientists ‘tricked’ a silkie chicken’s leg to growing feathers rather than their normal scales by activating a dormant gene. So perhaps, this chicken provides the answer to the genetic changes which happened as dinosaurs evolved to birds!