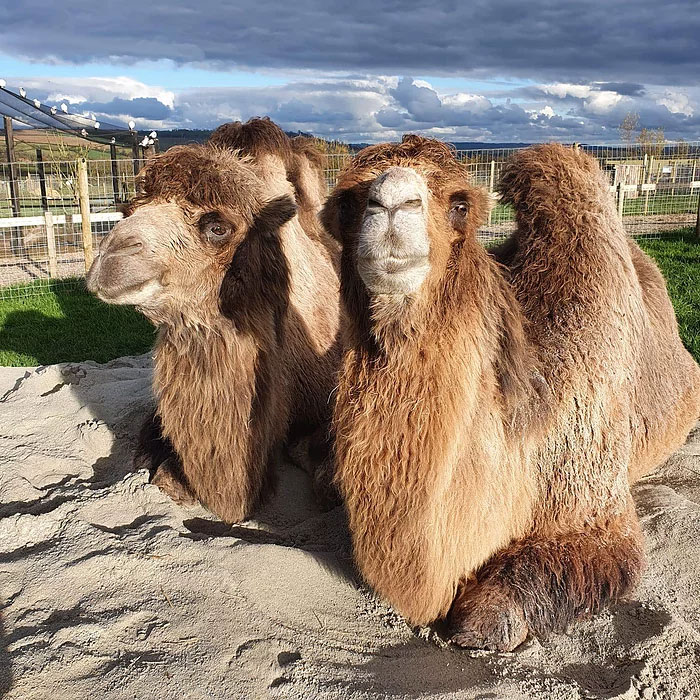 Amelia and Lola will greet you as you enter the park. Amelia is bold and sassy whereas Lola is more docile and shy. They are inseparable though and love to roll around in their sand pit when they’re not trotting around their field!

Camels first evolved in North America more than 40 million years ago, but are now extinct in this region. Today, these large camelids are found in grassy steppes and deserts across Asia, primarily in the Gobi Desert and Mongolia, but are also extant within Central Asia. The climate is their current wild habitat reaches both the cold and warm extremes.

Camels have evolved extreme adaption to cope and survive in the extreme environments where they are found. The two humps of the Bactrian camel – differing from the single-humped dromedary camel – contains energy-rich fat which a camel can use and metabolise in times of environmental stress. Although the humps do not contain water, contrary to common myth, camels can still last weeks with no water due to their efficient metabolism. Even when water is a rarity, camels are able smell water from 50 miles away and drink over 30 gallons of it at once. They have long eye lashes to prevent dust from getting into their eyes, a thick coat to keep them warm in winter which moults quickly to keep them cool in summer, and are even able to swim despite living in such arid areas. They are exceptionally well adapted animals to living in harsh, deserted habitats!

These herbivores eat a range of vegetation, with their thick lips allowing them to eat prickly desert plants with ease. They can push under snow to find food and even eat fish, bones, or human-made fabrics when food is scarce.

Wild Bactrians are diurnal, meaning they are active and forage during the day, and sleep at night. They are social animals, generally living in herds which contains one alpha male and females and their calves, or a bachelor group of males which have been evicted by the alpha male. These migratory animals follow their noses to be constantly on the move for food and water.

Bactrian camels are polygynous, meaning one male mates with multiple females. During the breeding season, males will not eat, but instead use their rich energy reserves to sustain them. Although the reason for this is not fully understood, it may likely allow males to concentrate on breeding and for dominant alpha male to defend their female group against other challengers. The alpha will chase other males away, and if this does not work then proceedings become more violent, with spitting of regurgitated food, biting, and sitting occurring. The successful bull will mate with all females, where the female will be pregnant for 13 months before giving birth to calf, usually in March-April.

Wild Bactrian camels are Critically Endangered. Although humans rely on them domestically in parts of the world where they re not threatened, wild camels are hunted for sport and killed when competing with domestic livestock.

Camels have two wide toes on each foot which have undivided soles. This spreads widely, providing a large surface area and so are able walk on sand or snow without sinking. Due to their immense adaptions, camels rarely have to cool off by sweating, enabling them to conserve more water!